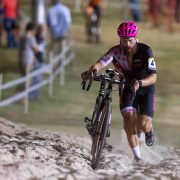 With the continual development of 4iiii Innovation’s product line, we are excited to include cyclocross into the mix. How did you get involved in cyclocross?

Years before I ever thought of racing on two wheels, I was once a runner. Too many miles through my teenage years lead to injury which plagued me venturing into my first year as a U of C Dino. Surgery, physiotherapy, and a life without miles to count were to follow – at least that’s what I thought at the time. They told me that the bike was a great way to rebuild the atrophied muscles surrounding my recovering knee. I hopped on and hated it at first, but never looked back. That was almost ten years ago, since then, I’ve slowly ventured deeper down the rabbit hole of cycling. First as a roadie, then when the season ended, Cyclocross was waiting to greet me with a gritting smile. All the while I was working as a bike courier in downtown Calgary and found similarities in the technical aspects of the sport with what I was currently doing to make a living. Couriering combined with my history of cross country running: cyclocross was a wonderful merriment of the disciplines I was already training unknowingly and since my teenage years. The rest is history, as they say.

Cyclocross is not on a lot of Canadians radar but it seems to be picking up speed within the cycling community.  What do you think is the reason for this boost in popularity?

Racing can be intimidating to fresh faces. First you need the bike, the silly tight clothing, generally a racing license before you even toe a start line. But the great part about cyclocross is how approachable the sport has become. Not sure if you’ll like it? Dust off the old mountain bike and come race the citizen class at any Alberta event and pay just a little extra for a day-license, something that is generally not offered in other cycling disciplines. Not to mention the community cyclocross naturally develops: the races are held in city parks on tight circuits where it’s easy to spectate and analyze the courses as a collective. From newbies to seasoned vets, the races aren’t longer than an hour, but you’ll generally find people staying at the venue for much of the day to spectate other categories which only adds to the inclusive nature of the sport in North America. Also, occasionally race organizers will apply to have permits for a beer garden so you can relax and enjoy a brewski after turning yourself inside out for the past hour in a socially accepted manner! Win-Win. Hot Sauce Cycling… how did you earn that handle?

The nickname ‘Hot Sauce’ was given to me while working in a bike shop, The Cyclepath, many years ago when I started racing. “Put on the after burners! Give ‘em the Hot Sauce!” Fellow employees would encourage as I set off to my next race. From nickname to European racing fundraiser to dare I call it a brand? Who knew it would grow to become what it is today. 4iiii sponsors a number of individual athletes and teams providing accurate data through PRECISION Powermeters. Why is power data important in your training and racing?

For years, I trained without any way to measure my riding beyond using a stop watch. In the early years before I had a coach I would ride over to Edworthy (a popular climb that many cyclists in Calgary utilize for training) and keep track of the times it took me to travel from base to peak. I would go home that night, journal them down, and put it away to collect dust forever.

FFWD to today: everything I do on and off the bike is quantified and analyzed largely thanks to my coach, Jack VanDyk at 3433. Power is the most accurate way to track and measure my performance week in and out, from training stress loads to planning my next peak performance – utilizing power data is the gold standard of modern sport analysis. Everybody at the top seems to be using it, and if you’re toeing the line locally on the weekends, even without a coach there’s so much out there now to help you improve and track your training through power that it’s a no brainer. Forget that carbon handlebar, go buy a power meter instead – you won’t regret it. 4iiii headquarters is based 30 minutes northwest of your home town in Cochrane, Alberta. We are thrilled to support our own local cyclocross hero, what does this connection mean to you?

4iiii has always been on my radar. I literally ride by its operations every time I pass through Cochrane on a long ride. With your impressive history of being one of the leaders in wearable technology, to producing the world’s lightest left side powermeter, PRECISION, at a very reasonable price point was a big draw. But it’s also their down-to-earth business mentality that brought me in. I am especially excited when I can partner with a local and Canadian brand with shared visions like  Kip and Victoria’s and the 4iiii team! Looking forward to seeing what you guys come up with next.

I’m currently a little over one month into the season and I’ve already ticked the box on one of my goals – it wasn’t so much a direct result that I was aiming for, but more of a ‘sense of belonging’ that I was aiming to achieve. With two World Cups under the belt and a fantastic weekend at KMC Cross Fest, I’m starting to believe and see myself at the front of North American pro races. This is a goal I’ve been working toward for the past couple of years, and in a roundabout way I believe my previous Belgian campaigns have helped bring this dream to fruition. I’m excited to continue racing Stateside for the next couple of months and see what I can do down there; Canadian Nationals is of course on the radar, and hopefully a return to the Heartland of CX, Belgium, in December. Time will tell.

Follow Hot Sauce Cycling on Instagram as he lays down power PBs (personal bests) throughout 2016-2017 with his 4iiii PRECISION Powermeter.

A Canadian sports technology Company is helping to power ORACLE TEAM USA to...
Scroll to top