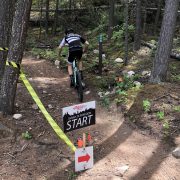 As engineer/athletes, we like to get out and test our products almost as much as we like creating them. This weekend, we had a chance to do some real-world product testing at the TransRockies Golden 24 race. Not only did we compete in the 24-hour competition, but we won the corporate division.

Earlier this Spring, we announced that we had “solved the carbon challenge” of making our power meters compatible with the industry-leading carbon cranks. Over the weekend, some of our best athletes put them to the test on the 14km Golden 24 course.

Before the race began, former pro roadie Bailey McKnight pre-rode the course with a camera on board, to give you an idea of the terrain. The course included a QOM/KOM segment that we sponsored for a power challenge. As of this writing, you still have almost two weeks to attempt the segment yourself—the top times for women and men will be awarded a non-drive side factory install power meter for your compatible cranks. Check out the segment on Strava, and give it your best shot. The corporate team division of Golden 24 allows for a team of between six and ten riders. We had six, each of whom would do a lap of the 14km course before handing off and settling for a break, a meal or even a nap.

That meant that each rider had to do four laps over the 24 hour period. It also meant that there was plenty of time to socialize and spend time with family, friends, other teams, and peers from the bike industry.

The team, and by all accounts the rest of the field, had a blast over the weekend. When we asked our athletes and some of our competition to describe the event in one word, we got answers like “epic” (more than once), “awesome,” and “perseverance.”

We want to thank TransRockies for organizing such a fun event. Maybe you’ll see us again next year to defend our title!

Interested in carbon cranks for your bike? Visit our web store and check out the list of compatible carbon cranks.

A Buying Guide, for Dad’s that Riiiide

Scott Cooper: My Career as a Pro Triathlete, Part 1—Why?
Scroll to top